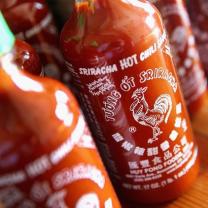 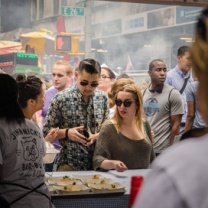 Lately I’ve been charring a lot of peppers in development of recipes for this blog. I used to think that the technique – essentially burning peppers over a gas flame in order to loosen the skin for peeling – was mostly unnecessary outside the professional kitchen. Home cooks shouldn’t be so picky as to care about having the experience of a dish tarnished by the snappy bite of a little vegetable skin, right?

Maybe not. I recently began to evolve on this point when I realized that charring poblanos could lend a smoky flavor to my lentil soup. Then I began working on a new recipe featuring red bell peppers, and as I’ve been testing and retesting it over the past week I realized that the skins absolutely had to go for the recipe to work. The thing is, when your recipe calls for 4 red bell peppers, charred, peeled, and seeded, and when you’re making that recipe three or four times in as many days, charring peppers becomes a major pain in the butt. After spending several hours over the past week turning peppers over the stove (many thanks to Brian for manning that station more than once), I decided there had to be a better way. 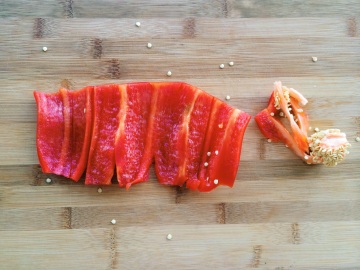 It took some trial and error, but I eventually settled on a technique to hack the charred pepper. My initial goal was to simplify the process so that it would be less time consuming, but I am pleased to say that my hack actually improved on the efficacy of the pepper-charring as well! The peppers actually burn more evenly, leaving behind no trace of unblemished skin that would otherwise be difficult to peel. So go ahead and forget the tedious stove-top method you were using before; my strategy works better. 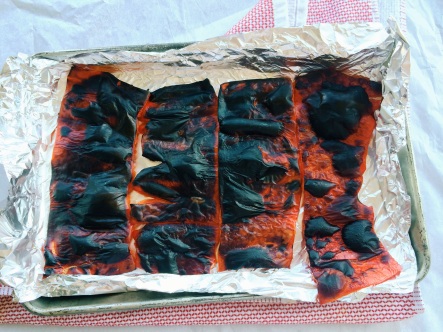 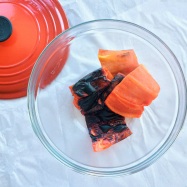 To hack charred peppers I use the exposed flame of my broiler to char the peppers for me – I char them upside down! The trick is to deal with the indented shape of the peppers, which makes it nearly impossible for the peppers to blacken evenly (or sometimes at all). To resolve this issue, I remove the core of the pepper and press them flat. By laying the peppers flat against a sheet pan, I am able to easily char several peppers at a time without attending to them at the stove.

This technique works for any kind of large pepper (bell pepper, jalapeno, poblano, anaheim, etc). Be aware that your kitchen will smell like something is burning as you char the peppers – you’re not doing it wrong, I promise, just open a window.

Hi, my name is Kirsten. Based in New York, I write about cooking and the impact that thoughtful food preparation has on my life.