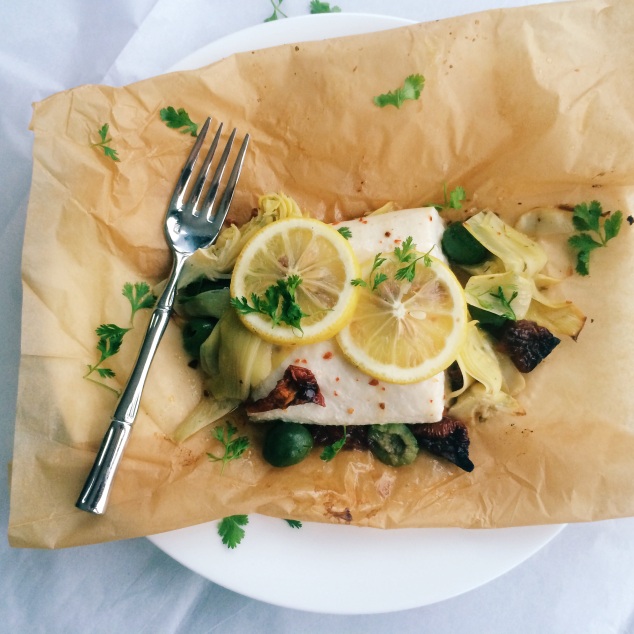 I know we’re still half a month shy of the solstice, but I’m going to go ahead and call it summer. It sure feels like summer here in New York, at least. We’ve had a handful of 80-plus degree days which, despite my Southern upbringing, have taken me by uncomfortable surprise. I ought to be a pro when it comes to dealing with the heat, but damn if it isn’t hard to make me swap my long-sleeves for tank tops. (What can I say, I like to be cozy.) The one thing that I do embrace fully about summer is the unending sunshine. There’s something incredibly freeing about realizing that, yeah, I still have some of the day left at the end of the day! The gift of summer provides hours of sunlit recreation to use to your discretion.

An afternoon in Riverside Park

You had better believe me when I say I plan to use those hours. Just this last weekend I rediscovered dusk. Remember dusk? That magical hour when the sun takes its time setting and casts everyone in a shimmering vital glow? Well, I found it in Riverside Park this Memorial Day, and with it found that quintessential summertime feeling in me of never wanting this day to end. This summer I’ll cherish dusk every day from now until October.

I’ll also be using the lengthened afternoon hours to kick my running up a notch. After having too many disappointing runs in a row (and subsequently finding myself so fed up I skipped over a week of sneaker-time), I decided I needed a boost to get my fitness level where I want it to be. Enter New York Road Runners training classes. Twice a week now I’m spending my evenings with the NYRR coaches up in Central Park, working on pacing, hill work, and interval training. 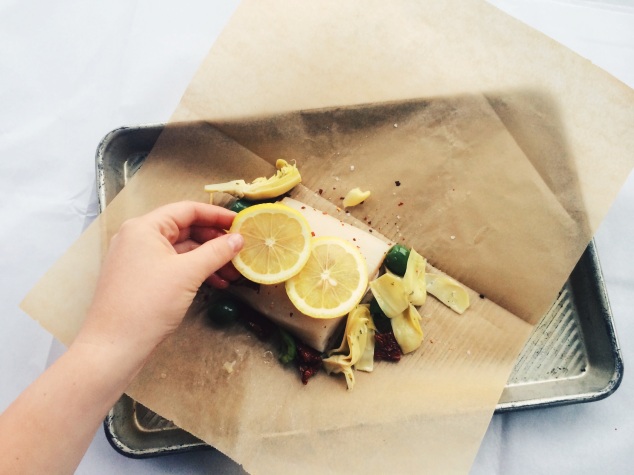 The tricky part of all this sunset-appreciation is figuring out how to fit in time to prepare dinner once the evening fun has come and gone. Delivery is an option, of course, but as I mentioned previously, it’s an option we’re trying to avoid. Leftovers are fair game, so some nights I deliberately cook more than is needed, leaving another couple servings for the following day. The best choice of all is a quick, delicious meal that feels thoughtfully prepared but has only taken a bare minimum of effort on my part to get it on the table.

This recipe is the ace up my sleeve for a meal that fits the bill for that kind of fast but real dinner. Its clever shortcut – utilizing a good antipasta bar – and sealed-up preparation make it applicable to all sorts of cooks: those with an aversion to chopping, or who are making dinner for one, or who want to prep the dish early in the day. Endlessly flexible, this dish works with all sorts of flaky fish – from halibut to sea bass to salmon – and is a great way to use up little bits of vegetables or herbs lurking in the refrigerator. Oh, and in case I had you believing that the simplicity of this dish implies any sort of unspecialness, I present you with this video. Despite its simplicity, there’s a sort of grandeur to the presentation here that makes the dish actually very special. I recommend serving the fish in its packet and unwrapping it at the table so that you can enjoy the steam and its beautiful aroma as it escapes from the bag. Personally, I think evenings when you are frazzled and hurried are when you need a special dinner most of all.

“En papillote” is a French technique for steaming fish in a parchment bag in the oven. You can prep this fish up to sealing the bag in advance and store it (wrapped in plastic) in the coldest part of your refrigerator before serving.

parsley or cilantro leaves, for garnish

Prepare your fish in its “bag”: Tear off a sheet of parchment paper at least 16″ long and fold it in half so that the short edges meet. (You can substitute tin foil for the parchment.) Place the fish near the fold on one half and season it with salt and pepper. Arrange the antipasta around the fish, halving large pieces if desired. Place lemon slices over the fish. Fold the parchment paper over the fish and crimp the two halves of paper together with a series of folds, beginning on one side and layering the folds around to the other. Tuck the last fold under the weight of the fish to keep the bag closed.

Bake: Place the fish in the center of the oven and bake for 15 minutes. Remove the fish and peek inside the parchment (careful of hot steam) to check for doneness. The fish should be opaque all the way through and still moist. Serve.

A strange dichotomy has taken root within me lately. It has been nearly a year and a half since I moved to New York, a city I love without rival and have dreamed of living in since the first time I read Catcher in The Rye. Yet, despite the fact that I now call this urban capital home, my values are shifting in a decidedly rural direction. I live in the city that never sleeps, but I generally don’t stay up much past sunset and wake with the crack of dawn; outside my front door is nothing but concrete for miles in each direction, but I yammer on about needing to go to the park just so I can dig my toes into the grass; this city grants me access to any ingredient in the world, but I still dream of having a garden of my own to grow fresh, unadulterated produce.

My shifting values don’t imply that I’m leaving New York any time soon – I still am in love with this city and all its diversity and opportunity – but they do increasingly require that I make a special effort to integrate my fantasy of living off in the mountains with the reality of city life. To that end, I’m making a habit of early weekend morning trips to Prospect Park, where I can let my dog off leash to chase squirrels with abandon as I relax to the soundtrack of chirp-inflected silence. Critically, I also try to get my food from local farms (and ranches, and fisheries) as much as possible.*

Farmer’s markets are a good way begin sourcing food locally, but recently I decided to deepen my commitment by joining a CSA. A CSA, short for Community Supported Agriculture, is basically a co-op that you can buy into wherein you become a shareholder in a farm (or community of farms) for a season. You generally pay up front, helping to finance the farm, and collect dividends weekly or biweekly as the produce is harvested.** The benefits to this sort of arrangement are many. With our CSA, we get a weekly delivery of vegetables (sometimes so many that we have to preserve some for future use), the assortment of which is more diverse than can be found in most grocery stores. The vegetables are incredibly fresh, bright in color and crisp in texture. And, top top it all off, our CSA saves us money. Though the $750 charge up front is a hard pill to swallow, spread out over the 25 weeks we’ll be receiving a produce box from now until November, it has actually cut our produce bill down to only $30 a week. 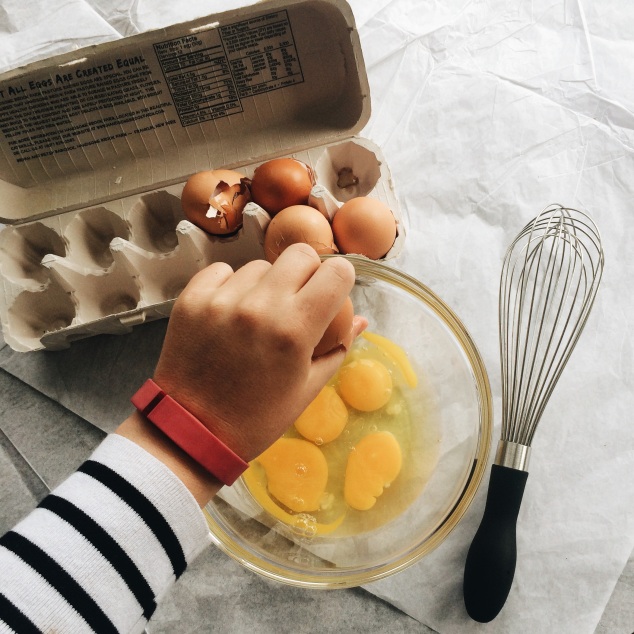 Interesting as this all is (to me, and only me, right?), I know you all really just want to know about that tasty frittata from the picture I teased you with up at the top. Okay, fair enough. That particular dish came together the night I brought my first CSA box home. In the basket, along with mountains of fresh greens and rhubarb, was a bundle of beautiful purple asparagus and a few green stalks they were calling “walking Egyptian onion”. I rummaged around the freezer to find some bacon, and called the boyfriend to pick up some eggs and Gruyère cheese on his way home from work. Served alongside some salad (with radishes also from our CSA), the frittata made a quick and satisfying dinner. I’m giving you this recipe on a Friday so that you can dazzle your guests (or hung-over roommates) with it for brunch this weekend.

Tweet: This Asparagus, Bacon, and Gruyere Frittata from #cookingwithbellson looks perfect for brunch! via @kemayell http://ctt.ec/v42cN+

*I’m sure some of this sounds super bourgeois, but my intentions are serious and humble. Locally sourced ingredients will have been pulled from the ground more recently, meaning that they’ve lost fewer of their nutrients on the way to my plate. The mustard greens I buy in the spring from a farmer in New Jersey will be fresher than those I buy in the winter from a farmer in Chile, so they’ll taste better, too.

**Or isn’t harvested – if the farm fails that season due to drought or flood, you take a loss on your investment.

Frittatas are extremely versatile. Feel free to substitute whatever looks good at your farmer’s market or grocery store. Swap out the asparagus for spinach, fresh or frozen peas, kale, or basil, and toss in some peppers or tomatoes if you like. The spring onions can be exchanged for yellow onions, shallots, or thinly sliced leeks. I love asparagus and Gruyère together, but Parmesan, feta, or even cheddar would work equally well. Have fun getting creative and let me know how you make your frittata in the comments! 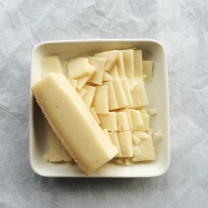 5 eggs, beaten and seasoned with salt and freshly ground pepper

Render the bacon: Heat a nonstick pan over high heat until water dropped on the surface of water evaporates on contact. Fry the bacon until crisp, 2-3 minutes. Pour off the excess fat (you can reserve it for a later use like I do) and wipe the pan clean with a paper towel.

Cook the vegetables: Place the pan back on medium high heat and add the butter and onions. Saute for 2 minutes or so until the onions are translucent and a bit brown around the edges. Add the asparagus and the water, then bring the water to a simmer to blanch the asparagus. When most of the water has cooked off, add the bacon back to the pan.

Serve: Carefully (that pan is hot!) remove the pan from the oven. The eggs should be thoroughly opaque and a little puffier than you last saw them. Allow the pan to cool for one to two minutes to finish setting the eggs. Run a spatula around and under the eggs to release the frittata from the pan, then slide the frittata onto a large plate. Slice into wedges and serve.

Hi, my name is Kirsten. Based in New York, I write about cooking and the impact that thoughtful food preparation has on my life.